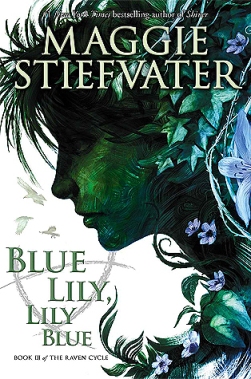 The third installment in the all-new series from the #1 NEW YORK TIMES bestselling author Maggie Stiefvater!

The trick with found things, though, is how easily they can be lost.

Friends can betray.
Mothers can disappear.
Visions can mislead.
Certainties can unravel.

This review may contain spoilers from the previous books. You have been warned!

Guys, I want to cry. I love this series so much! Send help.

Blue Lily, Lily Blue starts where The Dream Thieves left off. Maura is still missing, Glendower is still MIA, and worst of all, school has started. But the quest is still on and Blue and the Raven Boys are more determined than ever to find their missing king and Blue’s missing mother.

I don’t think I can say anything about Blue Lily, Lily Blue that I haven’t said about the previous books in this series. The story is one of the most unique stories I’ve ever read, maybe I haven’t read as much as other people, but I stand by my opinion. It is spellbinding and magical and I had a hard time believing I wasn’t reading about real people. It could get confusing at times but like its predecessors, everything was wrapped up nicely with a pink, sparkly ribbon at the end.

This book seems to focus more on Adam and you won’t find me complaining. I love Adam, with all his flaws and insecurities. Of course, all the other characters are still as amazing as usual and I can never pick a favorite 😦 I love the relationships between all these characters and I want all of them to be my friends. Well, maybe not the bad guys, but the villains in this book are fascinating and I have to say, I liked them, too. There is a new character introduced in this book that is very odd and I’m not sure how I feel about that person yet, but I can tell interesting things will happen.

Blue Lily, Lily Blue is more heartbreaking than the previous books and I am definitely heartbroken. There were a few things that I did not see coming. At all. I don’t want to spoil anything so you have to read it yourself and then you can tell me all about it.

I don’t really have much to say because I’ve said similar things in my reviews of the previous books, like how amazing the writing style is, how each character feels like a real person who is alive somewhere on the other side of the world, and how there is nothing boring about the story even though it’s not very fast-paced.

Blue Lily, Lily Blue is just as magical and enthralling as The Raven Boys and The Dream Thieves, if not more. It has an amazing plot, some of the best characters ever and I cannot wait to read the next one. Maggie Stiefvater is definitely a VERY talented author and this series makes her an auto-buy author for me.

“Mornings like this one were made for memories.”
― Maggie Stiefvater, Blue Lily, Lily Blue