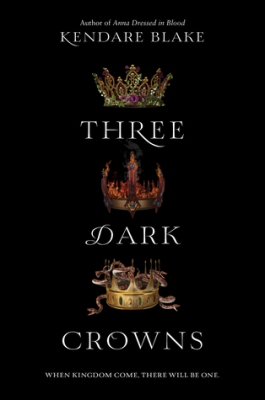 When kingdom come, there will be one.

In every generation on the island of Fennbirn, a set of triplets is born—three queens, all equal heirs to the crown and each possessor of a coveted magic. Mirabella is a fierce elemental, able to spark hungry flames or vicious storms at the snap of her fingers. Katharine is a poisoner, one who can ingest the deadliest poisons without so much as a stomachache. Arsinoe, a naturalist, is said to have the ability to bloom the reddest rose and control the fiercest of lions.

But becoming the Queen Crowned isn’t solely a matter of royal birth. Each sister has to fight for it. And it’s not just a game of win or lose…it’s life or death. The night the sisters turn sixteen, the battle begins.

The last queen standing gets the crown.

This is my first book by Kendare Blake, and while I didn’t know what to expect, I really wanted to love it. But sadly, it didn’t meet my expectations. I blame the hype.

I think one of the good things about Three Dark Crowns is the distinctive main characters. Katherine, Arsinoe, and Mirabella each has their own unique qualities that made it so easy for the readers to differentiate them from each other. That doesn’t mean that all of them have good qualities, they can get annoying at times, but at least we know who’s who 😀 . It’s interesting to see each Queen react differently to having to kill each other. We have one who doesn’t want to kill her sisters, one who really wants to, and one who (I think) just doesn’t care?

Having said that, I also have to say that I didn’t ‘root’ for any of them to win. I didn’t find any of them relatable. I don’t know… Maybe it just doesn’t really sit well with me that in order for someone to become queen they have to kill their sisters. Because I have sisters, and I don’t want to kill them. Not all the time anyway 😉 . Okay, you can say that ‘hey! they haven’t seen each other in years! They don’t know each other! That’s just the way their world works!’ Fine. But don’t they want to get to know their sisters before killing them?  But okay, I can get past that.

The multiple POVs and different locations in each chapter made the reading experience more interesting, once you get used to it. I liked the different settings and the different ways each ‘clan’ deals with the ascension of the new queen. But, I also think that what could’ve been a great story, is clouded with too much focus on the romance. I wasn’t expecting that! I thought Three Dark Crowns would be about the three girls plotting to kill each other.

My biggest issue with Three Dark Crowns is that it is SO slow at the beginning. It took me a long time to get through the first three-quarters of the book and I was seriously considering DNF-ing it. By the time the pace picked up towards the end, it did get very exciting and plot twists were popping up that I didn’t see coming, but I wasn’t as invested in the story as I would’ve been if more than the first half didn’t bore me so much. The main characters are also surrounded by a huge set of side characters that at times it was difficult to keep track of them, save for a few interesting characters like Natalia Arron. I do have some questions about the world, like the mainland and the suitors, but I think this review is getting too long already.

I know it sounds like I really dislike the book, but even though I didn’t love it, I didn’t hate it, either. The first 3/4 of the book was a chore to get through, but the last part made me curious enough to read the next book. I’ll probably just borrow it from a friend or the library, though.

“No one really wishes to be a queen.”
― Kendare Blake, Three Dark Crowns